A miserly 19th-century London businessman attempts to maintain his emotionally guarded world view in the light of a psychological onslaught from three Christmas spirits. 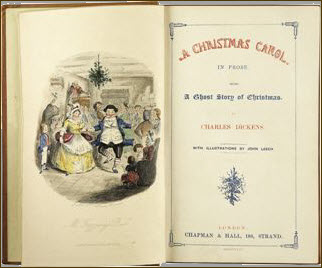 In Charles Dickens' classic story, A Christmas Carol, the main character, Ebenezer Scrooge, is a wealthy miser. There are many ways for rich men to behave—some spend freely; others seem always to be searching for new ways to increase their holdings. But Scrooge is neither of those. Scrooge is a miser. He maintains a very close eye on the money he has and is reticent to part with it for even his own basic needs, much less those of others. As Charles Dickens describes him: "Oh! But he was a tight-fisted hand at the grindstone... Hard and sharp as a flint, from which no steel had ever struck out generous fire, secret, and self-contained, and solitary as an oyster."

In the course of the story, his tight world view is challenged strongly by four Christmastime ghosts—and he succumbs to their attacks by opening his heart to the joy of human fellowship, compassion, and the spirit of Christmas.

When it comes to money, Ebenezer Scrooge is a keep character—and his type of intent involves keeping what he has, not betting the house or grabbing greedily for more in the attempt to satisfy an insatiable hunger. In this respect, he presents a stark and interesting contrast to Gordon Gekko, the power-hungry corporate raider from the film Wall Street, who is all about gaining.

In the context of the story, keeping is what Scrooge is about—both his money and a convenient world view that permits him to be stingy. And at the beginning of the story, he is satisfied with his world as it exists. Notice, I did not say that he is "happy," only that he is content with the condition of his world to the extent that he sees no need to take action to change it. Again, Dickens writes: "It was the very thing he liked. To edge his way along the crowded paths of life, warning all human sympathy to keep its distance..."

Scrooge is a keep character whose treasure is the isolation and miserliness with which he has grown comfortable.

We-the-audience might find the value of that satisfaction lacking, but at the beginning of the story Scrooge possesses a treasure that he values—a comfortable isolation and miserliness. And if left to himself, that condition would likely continue to exist until he died a lonely old man.

The problem for Scrooge, of course, is that Dickens does not leave him to himself. He visits him with agents of change—first the ghost of Jacob Marley and then the three ghosts who adjure him to change his manner of thinking. The resulting tag-team fight is between Scrooge, whose intent is to keep the miserliness that he treasures, and the ghosts, who spend the night attacking his world view and trying to tear down the walls of selfishness that he has spent years constructing.

Scrooge is, in every way, a keep character. His intent is to keep his world as it is—to survive the attacks of the ghosts and to wake in the morning unchanged. And because his general miserliness is a keep characteristic, his type of intent in the story is entirely consistent with his general nature.

If Dickens had imbued him with an insatiable captain-of-industry lust for financial conquest, the story would change entirely, not only in its particulars but in the goals of both Scrooge and the ghosts. Because he did not do so, however, A Christmas Carol is devoid of actions that seem false or contrived.

It is clear from the picture that Dickens paints of Scrooge, that he wants to convey Scrooge's world view as a sickness that needs to be healed. The impacts of that view on innocent others are particularly affecting—especially on his longsuffering employee Bob Cratchit, whose sick child, Tim, is a light unto the world. Consequently, we may assume that the storyteller considers Scrooge's intent, to hold fast to his tight-fisted world view, to be an inadvisable endeavor. In which case, the proposition for the story can be stated:

This proposition is very similar to that of Casablanca, in which the main character, Rick, attempts to keep himself from actively caring about others. And interestingly (but not surprisingly), the emotionally satisfying ending for either story requires that its main character fail in his respective endeavor.

The proposition in A Christmas Carol is very similar to that of the film Casablanca.

In A Christmas Carol, Scrooge fails in his attempted endeavor—utterly and completely. Does he end up happier for having failed? Absolutely. And are we-the-audience glad for him? For those of us who advocate generosity of spirit, the answer is most definitely "yes."

So here is a story in which the main character fails to achieve his story goal, and we-the-audience reckon his failure to be a positive outcome. Consequently, A Christmas Carol is a prime example of a fail/pleased story.

Because Scrooge is a keep character, his treasure is firmly rooted in the present. Consequently, references in the story to the past and future are useful only insofar as they affect his current struggle in the "now."

Because Scrooge is a keep character, his treasure is rooted in the present.

It is true that A Christmas Carol touches on all three aspects of time, but only one is directly related to Scrooge's treasure. For example, the Ghost of Christmas Past transports Scrooge into his own past and treats him to visions of his personal history—including his lonely youth at a boarding school and his young sister, Fan, and her odd, obscure reference to their father being "so much kinder than he used to be." That Ghost also reminds him about his generous employer, Fezziwig, and the sad young fiancée, Belle, who releases him from a marriage proposal because she has seen his "nobler aspirations fall off one by one." But none of these visions are meant to illustrate a world to which Scrooge aspires to be restored, as they would be in a regain story. They are, rather, nuclear-tipped cruise missiles fired by the Ghost of Christmas Past directly at the fortress of uncompassionate solitude that Scrooge has constructed around himself and intends to keep.

If they were not useful in that regard, they would not need to be included in the story.

It is also worth noting that the one major flaw in A Christmas Carol is the ease with which Scrooge gives up the fight. He is frightened by the appearance of the spirits, to be sure, and early on he dismissed that of Marley as the possible product of indigestion, saying: "'You may be an undigested bit of beef, a blot of mustard, a crumb of cheese, a fragment of underdone potato. There's more of gravy than of grave about you, whatever you are!'"

But when he is soon thereafter convinced that the struggle is real, the fight he puts up is ineffective and short-lived. He does attempt to extinguish the light emanating from the Ghost of Christmas Past at the end of their encounter, but to the Ghost of Christmas Present, he says: "'Spirit, conduct me where you will. I went forth last night on compulsion, and I learnt a lesson which is working now. Tonight, if you have aught to teach me, let me profit by it.'"

Although Scrooge's softening of spirit is heartening, its location in the storyline steals from the story the power of conflict.

As heartening as it is to see Scrooge's heart beginning to soften to the lesson of the Ghosts, its location so early in the storyline steals from the story the power of conflict. He has already begun to give up the fight, and from that point forward, we-the-audience are left to witness the battering of a beaten opponent. It is true that his final defeat does not come until he faces the Ghost of Christmas Future and sees his own grave, but because we have seen him falter and not try very hard to recover, we are ahead of the storyteller—a condition that always steals tension from a story and cripples its ability to build to a climax.

Interestingly, of the films that have been based on A Christmas Carol since 1935, only one has attempted to maintain Scrooge's resistance in the presence of the Ghost of Christmas Present—the 1984 film, A Christmas Carol, starring George C. Scott. In that film, Scrooge still gives up the fight before the climax comes; he just does not do so quite as early.

It is also important to note that Scrooge's characteristic type of intent—that of keeping—is not a lifelong trait; it came upon him over time. In fact, when Belle frees him from his promise of marriage, she reports: "All your other hopes have merged into the hope of being beyond the chance of [poverty's] sordid reproach... Gain, engrosses you..."

In other words, there was a time in his life when his main intent involved gaining, but that is not where we find him at the beginning of this story, which is all that matters here. And even here, Belle unwittingly reveals the purpose of his interest as a young man in gaining... it was to protect himself from the ravages of poverty. So the gaining was not a compelling goal for its own sake; it was merely a strategy of protection.

And all acts of protection are motivated by the intent to keep.