Finding Stories in the I Ching [Overview]

The I Ching ("Book of Change"), is an original Chinese classic the origin of which may lie as far back as 3,000 BCE. Is it a source of wisdom? Certainly. A source of story ideas? Now, that's an intriguing proposition. 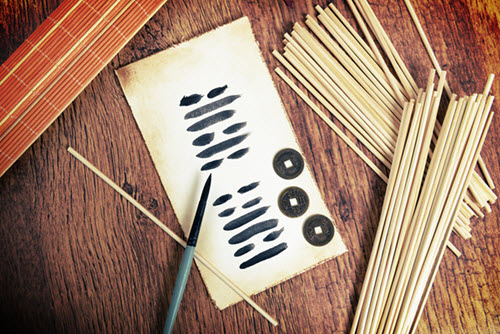 For thousands of years, human beings in every culture have recorded their observations regarding how to live. And the surviving texts of those observations have become revered as sources of ancient wisdom. One of the oldest of these sources is the I Ching ("Book of Change"), an original "Chinese classic" the origin of which may lie as far back as 3,000 BCE.

Throughout history, the I Ching has been consulted in matters ranging from politics and business to personal relationships and warfare, and it remains a go-to source of advice for people across the modern world. Part of its allure stems from the cryptic meanings that have been assigned to its symbols, the interpretations of which vary according to the person seeking its counsel. The meanings are cryptic not because they are intentionally vague or confusing but because they require the consultant to think deeply about how they might apply to his or her situation.

The Symbolic Structure of the I Ching

At its heart, the I Ching is based on a set of 64 thematic symbols called "hexagrams," each of which consists of six horizontal lines. Each line is either solid ("yang") or broken by a gap in the middle ("yin"). The yin and yang represent the duality of opposing pairs that we experience in everyday life, such as that between dark and light, cold and warm, and weak and strong.

Each hexagram can be thought of as a combination of two "trigrams" consisting of three lines each. There are only eight possible trigrams, and each trigram has a name—Heaven, Earth, Fire, Water, Thunder, Wind, Mountain, and Lake. 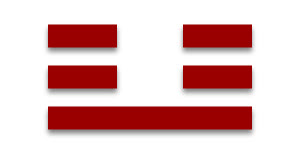 Interpreting the Meanings of the Hexagrams

When any two trigrams are combined, they form a hexagram the title and meaning of which depends on which trigram is "inside" (lower) and which is "outside" (upper). The inside trigram represents internal matters such as those that are personal, subjective, and/or related to the self. The outside trigram represents external matters, such as those related to outer appearances or other people. 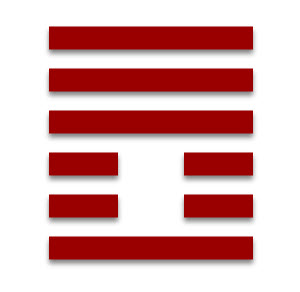 No Error | Without Rashness 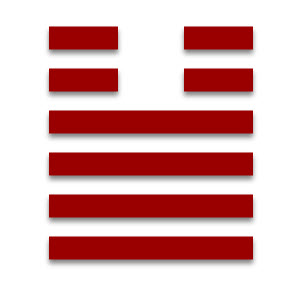 For example, the hexagram shown above (Heaven over Thunder) is called "No Error" or "Without Rashness" and represents firm outward actions driven by a strong internal initiative. The hexagram shown at right (Thunder over Heaven), on the other hand, is called "Great Boldness" or "Great Power" and represents the bold performance of external actions with internal strength and creativity.

The Connection to Storytelling

The I Ching can serve as a rich resource for any writer who is looking for story ideas or attempting to enhance her understanding of her characters.

By virtue of its nature as a systematized catalogue of meanings, the I Ching can serve as a rich resource for any writer who is looking for story ideas or attempting to enhance her understanding of her characters. The story ideas may be suggested by the names and meanings of the hexagrams themselves or by any of the line-by-line commentaries that exist in the literature. And the enhanced understanding can be obtained via the unique parallels that exist between the hexagram constructions and the principles presented in Discovering the Soul of Your Story.

Future articles on this website will explore the full development of specific story ideas that can be derived by studying the hexagrams of the I Ching, but two methods for doing so suggest themselves immediately when considering the task: a) extracting a story issue and theme from the hexagram name and b) being guided by a line-by-line commentary on the hexagram.

As an example of the first method, consider the hexagram called "Without Rashness," shown above. Using the methods outlined in Part Three of Discovering the Soul of Your Story, one can easily translate this title into the issue of "reacting carefully to unforeseen circumstances" and use the story and its characters' actions to argue either for or against the wisdom of doing so—thereby expressing the story theme.

In addition to direct interpretations of the hexagrams, sacred literature contains detailed analyses, most notably that of 11th-century scholar Cheng Yi, who expounds on each line of every hexagram, thereby creating a sequential commentary (from bottom to top) that can be used to mirror plot movement in a story. In the case of "Without Rashness," for example, the sequence may be said to include:

The specific way in which each of these elements might play out in a story would depend entirely on the main character, the setting, and the nature of the primary conflict. But once those parameters are established, this sequence could be used to guide the construction of the story itself.

As noted above, each hexagram in the I Ching consists of an inside part and an outside part, which represent internal and external matters, respectively. According to Discovering the Soul of Your Story, every character is driven by two different types of intents—one directed toward an internal condition of value and one directed toward an external condition of value. And the direct parallel between these two ideas can help the writer to understand and explore any character in her story.

The direct parallel between these two ideas can help the writer to understand and explore any character in her story.

For example, a character might intend to gain the hand of a love interest in marriage (the external condition of value) in order to regain a sense of self worth that she considers lost. In this case, the wedding vow represents the external will-she-or-won't-she-succeed goal that we-the-audience will use to judge story progress, but the sense of self worth will provide the internal condition of value that will help define the story theme.

To apply this approach to an I Ching hexagram, one need only interpret the upper and lower trigrams as internal and external intents, respectively. For example, the two trigrams that make up the "Without Rashness" hexagram are Heaven (external) over Thunder (internal). So a main character who reflected the hexagram might possess an external intent of keeping self-control in the face of an unexpected occurrence but an internal intent of doggedly seeing to it that a necessary action is taken. And the combination of those two intents would determine the character arc and story path.

The First Step on the Way

The world abounds with story ideas waiting to be found and groomed by the astute writer. Some ideas present themselves in moments of unconscious inspiration; others leave only clues to their existence and require the writer to search for them methodically, so that her investment of time and effort will help her appreciate and respect them all the more.

Some story ideas... lie hidden in great dark nests and must be called by their names to be roused.

It is this latter species of story that we seek in this series of articles titled "Finding Stories in..." Some story ideas can be found by examining artifacts that contain them, like a photograph or aphorism, but others lie hidden in great dark nests and must be called by their names to be roused. The I Ching and other great books of wisdom can serve as the caves in which such nests are built. One just needs a way to explore them.

And the writer who puts on her hardhat and travels bravely into the depths of the caves will not be disappointed.