The principles in Discovering the Soul of Your Story can be used to generate stories from photographs—such as this one of a woman engaged in mournful prayer. 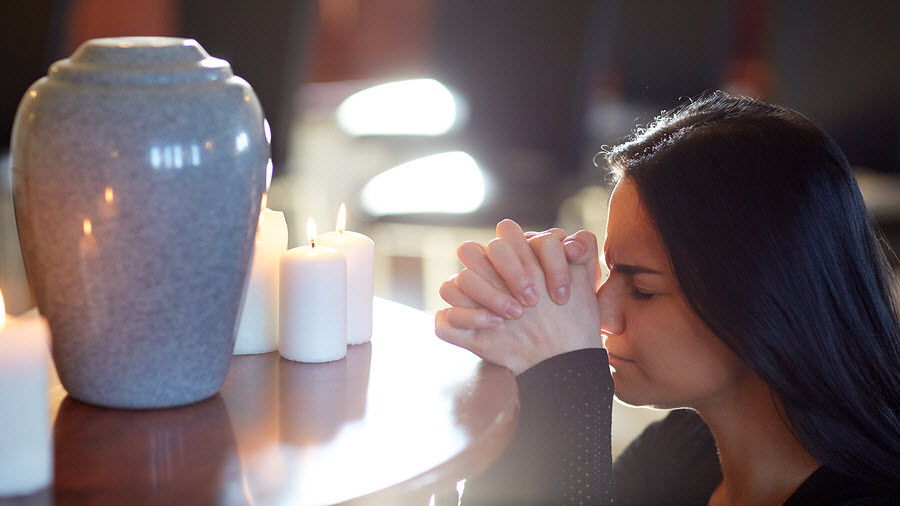 Gleaning Treasures from a Picture

In the photograph above, a woman kneels and prays next to a funerary urn, presumably containing the ashes of someone she cared for.

As Chapter 5 of Discovering the Soul of Your Story points out, a main character who has suffered the loss of a loved one is certainly sympathetic to an audience, but the loss itself is not enough to generate a story. Rather, the story stems from what the main character does in the wake of the loss and is specific to her treasure and type of intent. In this case, the treasure and type of intent may depend on whom she is praying to and why she is praying.

A main character who is praying because she has suffered the loss of a loved one is sympathetic to an audience, but to find the story, we must explore the nature of the prayer.

For example, if she is praying to the deceased relative, her prayer might be an attempt to gain guidance with regard to some important life decision. In that case, the treasure in her immediate action is the guidance that she seeks to gain, but the treasure that drives the story may lie in the decision for which she needs it. She might, for instance, be asking a deceased husband for guidance regarding whether to accept a proposal for remarriage—in which case, the story might be driven by either her attempt to keep her loyalty to her late husband or her attempt to gain freedom from the cultural judgments that would prevent her from moving on in her life (two very different treasures).

As an alternative, she might be praying to the deceased love one to gain a sense of forgiveness for some unresolved wrong for which she needs to feel absolution so that she can move on with her life. In that case, the treasure is a sense of absolution, and the story may follow her attempts to gain it.

However, if she is praying for (rather than to) the deceased person, then her treasure must involve the well being of that person, which is likely to be a gain attempt—with treasures such as his or her fortunate rebirth and enlightenment or well-lighted wanderings in the samsara.

In either case, the nature of the prayer determines the direction of the story, including what starts it and what goal we-the-audience will use to measure its progress.