Who is the main character in Thornton Wilder's "Our Town"? 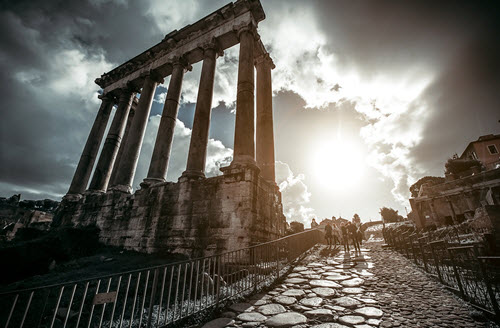 Recently, a friend of mine asked me to read a screenplay he had written, and it was his assertion that all the inhabitants of the town who were the screenplay’s protagonist, which I interpreted to mean “Main Character”. This assertion jogged my memory, in that LA FUENTE OVEJUNA (translation: The Sheep Well) by Lope De Vega was reported to have had a multiple protagonist; in other words, the town of Fuente Ovejuna rose up as the “lead character” to punish the rapist in their midst. It is the only work of literary art that has been identified as such that I know of, and even then, I think this assertion is at least suspect, if not altogether false. We all know the importance of the Main Character and the four duties of the Main Character. I would quibble with the argument that several people can be the Main Character, since one of them must stand out and do the heavy lifting required by the Main Character, thus making that person the Main Character by default. And that led me to my next question, “Who is a Main Character?” And that is why I am now thinking about Thornton Wilder’s OUR TOWN.

If you count the lines of all the characters in OUR TOWN, you might come to the inescapable conclusion that the Stage Manager is the Main Character of this play. After all, he starts and finishes the play, appears in every scene, and makes philosophical comments at various significant points throughout. But how much heavy lifting does the Stage Manager really do?

To remind you: the play is in three acts. Each act is divided thematically, with the first act telling us about daily life in Grovers Corners, New Hampshire, the second act telling us about love and marriage in the town, and the third act depicts death and dying. Is the Stage Manager the vehicle for the story? To me, that’s a resounding “No” because his intentions and actions do not provide us the vehicle for the story that he—the on-stage persona of the playwright, Thornton Wilder—wants us to experience. (Side note: In the world premiere of this play, the Stage Manager actually was played by Thornton Wilder himself. What better indication is there that the Stage Manager is the person who articulates the premise of the play and also represents the author’s viewpoint, but nothing more?) Do the Stage Manager’s intentions and actions generate the story? I say no because what he does and says introduces parts of the story while the actions and intentions of George and Emily generate the story as it moves forward. And how is the progress of the story indicated by what the Stage Manager does instead of what George and Emily do? It doesn’t. Concerning whether the Stage Manager is the bearer of the theme of the story, only to the extent that he says it out loud, can he be considered having anything to do with the theme. Primarily, the theme is revealed by the actions and intentions of George and Emily.

So, is the Main character of this play two people: George and Emily? Emily is there in the beginning, when she meets George and talks to him for the first time, telling how stuck up she thinks he is. She is there with George in the second act, which involves their plans to get married. And she is there in the third act to give us insight and demonstrate for the audience the theme of the story, helping to carry the story to its final conclusion. Near the end as she comes back as a spirit to view her own funeral, Emily asks the Stage Manager if anyone really realizes life while they are alive, and the Stage Manager replies, “No. The saints and poets maybe—they do some.” So I wonder, if this were a double funeral, maybe the result of a car accident and George were with her, could they have been co-Main Characters? I really don’t think so because the heavy lifting has to be done by only one person, so as not to destroy or dilute the focus of the story. Intention, plot, theme, and progress all resonate better for the audience or reader when these elements are not shared by more than one Main Character.

My next question, naturally, is what on the “GROK” scale is being pursued by the characters in the play? They are all struggling to live in Grovers Corners. Some are trying to gain what they do not have—success and happiness in each of their lives—the ones who have it are trying to keep it, and the ones who have lost it—Simon Stimson for instance—are trying to regain it. Now this probably violates how I’m supposed to be looking at the GROK principle, but I believe that, because there is a great sense of universality and metaphor in this play, it is fair to say that gaining, regaining and keeping are in effect for just about every beat of this play.