A mysterious young man who can perform genuine magic attempts to gain entry into a prestigious guild of illusionists whose abilities pale in comparison to his own. 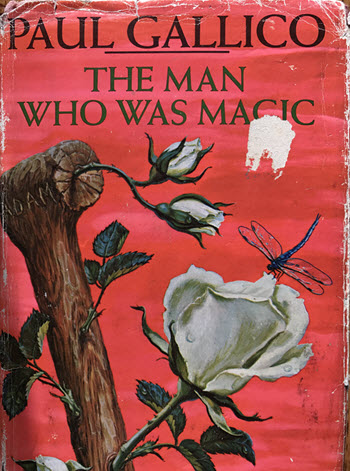 The Man Who Was Magic is set in the fictitious town of Mageia, a walled city not found on any map (located "somewhere west of East and just to the south of North") that is dedicated to the art of illusion.

The town is populated exclusively by professional stage magicians and their families—and proudly so. In daily life, all of the men and boys dress as they would while performing onstage, in tail coats with top hats or Oriental robes and turbans. And all of the women and girls dress in the silk tights and spangled skirts appropriate to the role of magician's assistant. (More on that, below.)

On the surface, Mageia appears to be the picture of contentment and gaiety, with strangers performing friendly sleight-of-hand tricks as casual greetings on the street. But as with stage magic itself, appearances can be deceiving, and a peek behind the social curtain reveals that the political environment of Mageia is quite toxic, with vicious power struggles playing out among its elite.

Mageia appears to be the picture of contentment and gaiety, but hides vicious power struggles playing out among its elite.

It is into this strange little town that a curly haired stranger named Adam appears one morning accompanied by his talking dog, Mopsy—to apply to the Guild of Master Magicians, a membership that he hopes will identify him as belonging among the ranks of the greatest magicians in the world. In the land where he comes from, somewhere beyond an impassable mountain range, his talents are considered quite ordinary. But it soon becomes clear to us-the-audience that Adam is not ordinary at all, because he can perform genuine magic that has nothing to do with sleight-of-hand or misdirection. And when that suspicion arises among some of the less noble citizens of Mageia, it generates the kind of distrust that honesty tends to spawn when it lands in an ecosystem of lies.

Into this town comes a curly haired stranger named Adam, who can perform real magic.

To accomplish his goal, Adam must pass an elimination trial and land a spot in the finals, where only three of eight finalists will be admitted to the Guild. He does so, of course, but not without sowing the seeds of fear that grow quickly into near panic among some of the more sinister Guild members, who see the need to plot his demise.

Among the many rules of the competition stands one that requires each magician to have an assistant. And through his kindness, Adam acquires one in the form of a young girl named Jane, who happens to be the daughter of The Great Robert, the man who is not only town mayor but Chairman of the Board and President of the Guild of Master Magicians. Unlike her fellow citizens, however, Jane feels marginalized and out of place in Mageia—not because she does not belong but because she is not allowed to belong in her true calling, as a magician rather than an assistant.

Over the course of just two days, we-the-audience witness the events that ensue from Adam's pursuit of his goal and the effects of that pursuit on the townspeople, especially Jane and an inept and weak-willed illusionist ironically named Ninian the Nonpareil. And we are also made privy to the aftermath of Adam's pursuit and the changes it leaves in its wake.

To examine The Man Who Was Magic from the standpoint of the concepts presented in Discovering the Soul of Your Story, let's focus on its characters and theme.

In terms of the approach that lies at the core of Discovering the Soul of Your Story, the main character Adam is a gain character whose treasure (membership in the Guild of Master Magicians) is external and clearly defined. Although his journey is made resonant by virtue of his interactions with the other characters, it is his pursuit of Guild membership that provides its through line.

Adam is a gain character whose treasure is external and clearly defined.

In this case, however, the attempt by the main character to achieve his goal provides only a very slight bend in the story arc, which is why The Man Who Was Magic is more of a "tale" than a "story." (See "The Difference Between a Story and a Tale.") By the time Adam reaches his do-or-die moment in the finals, his initial goal of being admitted to the Guild pales in importance to that of protecting his own life and those of his friends from the fearful powers that intend to destroy him. And his ultimate disposition in the tale is only mildly related to the attempt that caused him to set out on the journey in the first place.

The core ensemble can be divided into Allies and Opponents—with one significant outlier.

The core ensemble of characters in this tale can be reasonably divided into camps of Allies and Opponents, with one significant outlier. The allies include Jane, a gain character who would like to become a magician herself, and Mopsy, a keep character who serves as a protective companion and bodyguard. The opponents include Malvolio the Mighty (and his lickspittle lieutenants), a gain character who would like to bring down The Great Robert and install himself as leader, and even Robert himself, a keep character whose political interests in maintaining his position outweigh any concern for the well-being of Adam or Jane.

And the outlier takes the form of Ninian, a weak gain character whose deep insecurities cause him to waver dangerously between gratitude and betrayal.

To express the theme of the story, we can look first to its issue—that is, the subject presented as a matter of debate and argued for or against by the actions of its characters.Adam fails but leaves Mageia changed forever. And in this case, the issue seems to revolve around the central ideas of reality versus illusion and honesty versus deceit. Consequently, it might be stated as simply as "making inroads for honesty in an environment of deceit." In which case, the proposition of the work might be expressed as:

In the end, Adam fails in his attempt to gain membership in the Guild, but the manner in which he fails leaves Jane, Ninian, and all of Mageia changed forever. So in this sense, we-the-audience can be pleased for his failure, because its fruits are richer than those he would have achieved by simply accomplishing his initial goal of gaining Guild membership.

In some ways The Man Who Was Magic can be thought of as a chemistry experiment along the lines of "Let’s observe what happens when we place a drop of Substance A into a beaker full of Substance B." Here, Substance A is the curly haired young man who can perform real magic, and Substance B is a small, insular society that has become toxic due to its overuse of deception. In reading the tale, we-the-audience are observing the important reactions in "real time" and monitoring the outcomes.

In this case, Substance A vaporizes and disappears after all the important reactions are complete. But its effect on Substance B is both positive and lasting.