A man displays hubris regarding his ability to handle the forces of Nature as he attempts to reach a Yukon mining claim. 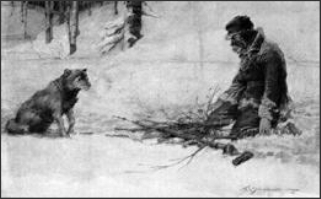 In To Build a Fire, the main character is an unnamed Yukon adventurer who journeys by foot to an old mining claim, where he expects to rendezvous with two unnamed companions (referred to as "the boys") who have already arrived at the claim (having traveled together and taken a different route) and set up camp. When we-the-audience first meet the man, he is surveying the trail behind and ahead of him and taking in his vast, desolate, bitterly cold surroundings. The trail is barely visible in the great expanse of ice and snow, and the sky is gray even though it is cloudless, because the sun has not risen above the horizon for several days.

An unnamed Yukon newcomer journeys alone on foot to a mining claim, accompanied only by his dog.

The man is a relative newcomer to the Yukon. And against the advice of those who are more experienced with living in the extreme winter climate—especially that of an "old-timer from Sulphur Creek"—he is traveling alone except for a gray-coated husky. And since he expects to arrive at the camp in the early evening, he is "traveling light," having brought only a biscuit-and-bacon sandwich for lunch, which he carries underneath his clothes to prevent it from freezing.

As the man prepares to set out on his journey, he is granted a brief taste of the extreme bitterness of the cold that surrounds him—when drops of spittle that he expels from his mouth crackle before they hit the snow at his feet, indicating that the air temperature is much colder than any he has experienced before. (It is, in fact, more than 100 degrees below freezing.) But rather than turn back, he forges ahead with the dog at his heels, convinced that the old-timers are "somewhat womanish" and that their warnings against traveling alone in such cold are not worth considering seriously.

His confidence leads him to spurn warnings from old-timers whom he considers "somewhat womanish."

Because he is traveling alone and without a sled, he is able to maintain a satisfying pace and soon arrives at the milestone of Henderson Creek, on one fork of which, miles away, "the boys" have made their camp. And although he experiences the discomfort of the rapid numbing of exposed flesh—in particular, his cheeks and nose—he presses on, regretting only that he did not devise for himself a nose strap to protect his face from exposure.

Soon, however, he encounters and barely avoids a water "trap"—a pool of water hidden under the snow and ice and fed by springs that never freeze, even in the coldest of winters. And the encounter alerts us-the-audience to the significance of the danger. If he were to break through the ice cover of such a pool and become wet, the wetness would freeze nearly instantly and lead quickly to possible frostbite and, perhaps, even death.

Only after he finds himself unable to bite into the sandwich because of the cold does he chide himself on not building a fire first.

From then on, the man is somewhat more circumspect regarding his steps, always on the lookout for such traps and, in one instance, forcing the dog to lead the way and test the ground ahead. But by midday, he arrives at the second milestone, the fork in Henderson Creek, and treats himself to the sandwich to celebrate his relatively rapid progress—the danger of the journey momentarily forgotten. And only after he finds himself unable to bite into the sandwich because of an ice muzzle that has formed from his breath and saliva does he chide himself on not building a fire first—and sets about doing so.

Amused by his own foolishness, but not severely chastened with regard to the old-timer's advice, he builds a roaring fire beside which he can warm himself, thaw his face, eat the sandwich, and even enjoy a bowlful of tobacco in his pipe. And having done so, he sets out again quickly (much to the chagrin of the husky, whose instincts compel it remain by the fire), confident that he is up to the rest of the journey—caution be damned.

An accidental step into a "water trap" wets his feet and legs halfway to the knees.

Shortly thereafter, however, he encounters another trap in the trail but is unable to avoid breaking through—and wets his feet and legs halfway to the knees. And despite the seriousness of the event, he curses his luck rather than himself, simply because he will be forced to build another fire and delay what he sees as his eventual arrival at the camp.

By this time, though, the cold has begun to severely inhibit his movements, especially in his fingers, which numb quickly when exposed to the air. Consequently, this fire is much more difficult to build than the one he built previously. And in his haste to do so, he forgets to locate it in the open, rather than under a tree—which, disturbed by the subtle movements of his picking at it for twigs to build the fire, sends down a cascade of snow from its branches, dousing and burying the fire.

When a final attempt to start a fire fails and destroys his remaining matches, it begins to dawn on him that he is doomed.

Realizing the growing importance of building a fire, he attempts to do so yet again. But by this time, his movements are nearly completely curtailed by numbness in his flesh and fingers, so that he can barely get any of his matches to light, much less a fire to start. And when a final attempt results in the burning of his own flesh and the extinguishing of all of his remaining matches, it begins to dawn on him that he is doomed.

In panic, he attempts to run up the trail, to get his blood circulating, but finds himself unsteady and without endurance. And he conceives of a scheme to kill the dog and thrust his hands inside it to thaw them out. But by this point, he can barely grasp the dog, much less his knife.

Eventually, after attempting to run again—and falling headlong into the snow—he sits up at the spot where he fell and lets the sleep of hypothermia overcome him, envisioning himself as part of the party that will find him frozen to death. And as the dog smells death having overcome its master, it slinks off to find another "provider of food and fire."

Because the main character in To Build a Fire is on a journey from Point A to Point B, it is tempting to think of him as a gain character whose treasure is his successful arrival at the camp. In this case, however, his purpose in making the journey is to keep a self-imposed appointment with "the boys"; therefore, every step of progress that he makes along the trail can be couched as the advancement of a keep intent. And regardless of his motivations at the beginning of the story, the heart of the story concerns his attempt to survive—which is clearly a keep intent.

The main character is intent on keeping an appointment, as well as maintaining a naïve attitude of superiority to Nature.

The story contains gain actions, too, such as when he achieves the milestone of arriving at the Henderson Creek fork and when he succeeds at building his first fire—and small regain actions, such as those involved in his struggle to retrieve matches that are lost in the snow. But at its core, To Build a Fire is a keep story.

The story contains gain actions, too, but at its core, it is a keep story.

To ascertain the theme of the story, it is best to examine the fatal flaw in the attitude of the main character that leads to his ultimate demise. And although that flaw relates, in part, to his unwillingness to follow the advice given to him by the old-timer of Sulphur Creek, its scope transcends mere bullheadedness and may be said to stem from an overconfidence in his own ability (as a man who can "keep his head") to overcome any icy threat that Nature might send his way—and, more specifically, his insistence on maintaining that attitude irrespective of the warnings offered by the old-timer and Nature itself.

To ascertain the theme of the story, it is best to examine the fatal flaw that leads to his ultimate demise.

Although he does yield gradually to the idea that the old-timer might have been right—and acknowledges the idea fully in his last moments—much of his activity involves keeping stubbornly to the notion that he is in command of his journey and its associated perils. Even as his feet begin to freeze after stepping into the water trap, he refers to the old-timer and those like him as "womanish" (read: weak), simply because he feels himself to be in temporary command of the situation.

The issue of the story, then, can be said to lie in the realm of "maintaining an overestimation of one's ability to handle the forces of Nature." And the proposition might be stated as:

The main character's success leads to his downfall—and our disappointment.

Although the main character in this story does acknowledge, in his final moments, the wisdom of the advice he rejected from the old-timer, his lateness in doing so renders him successful in the keeping of his attitude (of supreme confidence) until it is too late. And because we-the-audience are likely to root against his hubris, we are prone to be disappointed (or at least not pleased) by his success, because we feel that his failure to maintain the attitude is his only chance for survival.

Consequently, To Build a Fire stands as a chilly example of a succeed/disappointed story. And because the hubris of the main character results in his own death, the ending must be said to be unhappy.